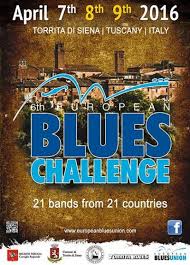 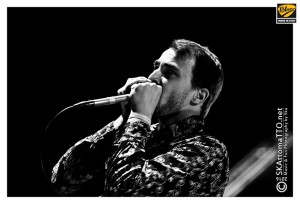 I finally found some time to write a little about our trip to Torrita di Siena.  Some time has already passed since me and my band participated in European Blues Challenge, where we got nominated by the Slovak blues association, but there is still something to share.

We – that is me, Zsolt Szitasi, Denis Pagac and Igor Havetta – set off from Bratislava on Thursday 7th of April and after a very long drive we finally arrived at 10 a.m. at Agroturismo Santa Maria were we were staying. Well, Tuscany roads look very similar,  so we took a detour each time we drove to this nice B&B. We slept, then did the sound check, then slept a bit more and then again headed off to Torrita’s sport’s hall were the event took place. All bands were great on the Friday afternoon, anyone could win, the French guys who played before us were absolutely amazing. Well, we did our 20 minute set, played all the good stuff.We did a great job being a bit different, stepping outside the blues idiom most bands seemed to worship. Still the essence was there and the crowd was fantastic. Although, had the organizers picked a different location, it might have been much bigger. Still, we did not make it to the top three. Anyone could win that weekend, so it’s not a big deal. There was another 12 hour journey ahead, so after a good night’s sleep we packed and said goodbye to Tuscany. We embarked on another 1000 km drive with a lot of fun and good music in the car.