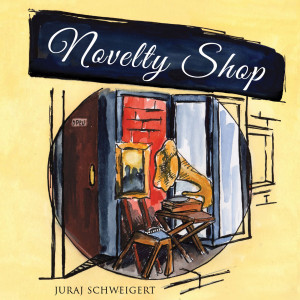 I was happy to hear that my recent release was among the few CDs reviewed in the June issue of an American  online magazine Blues Blast. Even more so as it received a very favourable review.  Read more here or in BLUES BLAST MAGAZINE ISSUE 10/2016. Thanks

Juraj Schweigert is a Slovakian harmonica player and singer who has released a fascinating album in Novelty Shop. With elements of blues, swing, jazz, rock and even the old prison work song, “Let Your Hammer Ring”, there is much to enjoy in the ensemble playing of Schweigert’s band and his own stellar harmonica playing.

Opening with the upbeat instrumental, “Tropospheric”, a tribute to the chromatic harp playing of Rod Piazza, the band lays down a solidly swinging groove over which Schweigert is able to stretch out. The band’s jazz background is obvious from the lightness of touch of the players, not to mention drummer Juraj Rasi managing to slip in a very short solo on the very first song of the album.

Guitarist Zsolt Szitasi is featured on the jazzy “Is The Dinner Ready Yet?”, one of six songs written by Schweigert, on which bassist Martin Kapusnik also takes a solo. However the focus of the album is very much on Schweigert and his harmonica playing. He plays with a glorious tone, top class technique, a ready ear for a memorable melody and a playful willingness to stretch musical boundaries (but never too much).

The majority of the songs on the album are instrumentals, nearly always led by Schweigert’s harp. Russian Mob” blends a swinging mix of jazz, ska and even some a hint of Latin music, while “Harold The Squirrel” has a jazz-rockabilly edge to it. The title track, meanwhile, starts with a discordant, almost heavy rock edge featuring over-driven guitars, before subtly moving to the head played by Schweigert and Szitasi in tandem, harmonising off one another and then reverting back to the discondant and disquieting opening. “Bald Joe” is a gentle ballad with acoustic guitars backing Schweiger’s harp and a lovely solo from Kapusnik. “Intresque” has something of a ragtime feel, particularly in the drumming of Juraj Rasi. When he does sing, however, Schweigert does a fine job, particularly on the old T-Bone classic, “She’s The No-Sleepin’est Woman” and Dizzy Gillespie’s “The Bluest Blues”.

One of the most interesting (and to this reviewer’s ear, enjoyable) tracks on the album is the final song, listed as a bonus track. Featuring Schweigert’s voice and harp, backing vocals from Juraj Rasi, L’ubos Brtan, Juraj Varga, Michal Varga, David Szabo and Peter Nosik, the keyboards of Valer Miko and wood cutting from Juraj Rasi, Tamas Belicza, Schweigert and Co. take the traditional “Let Your Hammer Ring”, retain the original melody but layer fascinating organ over the top as Schweigert’s harp imitates fujara (a traditional Slovak national instrument) and pipes at the same time as singing an old Slovak highwayman tune. It really shouldn’t work, but it does, and it makes hypnotic listening.

You will want to pick this album up if you enjoy top class harmonica playing or if your tastes extend to a gentler, swinging jazzier side of the blues. Very impressive stuff.